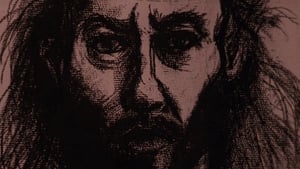 Cooper receives some unsettling news, while Audrey continues to work undercover as a hostess at One Eyed Jacks in Canada.
Log Lady Introduction

As above, so below.

The human being finds himself – or herself – in the middle.

There is as much space outside the human, proportionately, as inside.

Stars, moons, and planets remind us of protons, neutrons and electrons.

Is there a bigger being walking with all the stars within?

I think it does.

Where does creamed corn figure into the workings of the universe?

What really is creamed corn?

Is it a symbol for something else?

10/30: Where does creamed corn figure into the workings of the universe?