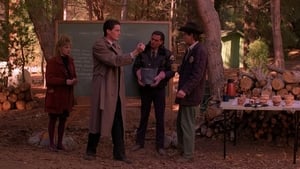 Sometimes ideas, like men, jump up and say hello.

They introduce themselves, these ideas, with words.

These ideas speak so strangely.

All that we see in this world is based on someone's ideas.

Some ideas are destructive, some are constructive.

Some ideas can arrive in the form of a dream.

I can say it again.

Some ideas arrive in the form of a dream.


After the Pilot, this would be the first David Lynch directed episode of the show proper - and the only one in Season 1. It introduces the red room via an infamous dream sequence that drew a lot of attention at the time - and since (the scene itself originally featuring in the extended ending of the European Pilot for VHS release, trimmed down and repurposed here).

A fun picture by "Scott C." shared on that thread by LostintheMovies (who is an invaluable TP contributor mentioned and linked to elsewhere on this site and who started many of the episode threads on Dugpa - I hope he joins this forum one day!): 3/30: All that we see in this world is based on someone's ideas