The ending of Episode 27 was a subject of some conversation years ago on the dugpa boards, specifically as to the mystery of when it was shot (and by whom), and it’s something I still think about periodically, so I figured I’d bring it up again. There are a few interesting things here.

Starting with the sequence as scripted: 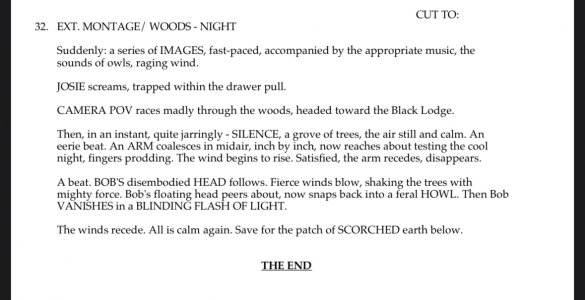 The gist of the idea is there, but it’s obviously somewhat different from what ended up onscreen. For one thing, Josie was dropped, and the ominous series of (mostly stock) shots of iconic town locations was added.

More interestingly, neither this script nor the Episode 29 script has any mention of a pool of oil being present in Glastonbury Grove (and the Ronette scene with the jar of scorched oil is also not present in the Episode 29 script). Although this script does mention a patch of scorched earth (seemingly caused by Bob’s flashy disappearance and not present before that), to me, the pool of oil feels like something added by Lynch during production of Episode 29. So that’s arguably one point for the Episode 27 sequence having been possibly reshot later, maybe by Lynch during production of Episode 29.

Another interesting point is that the fallen branches placed around the pool seem to be identically positioned to the way they are in Episode 29. It seems unlikely that the continuity would have been so spot-on if the scenes were shot weeks apart, since the location is in a public park. (Contrast this with Glastonbury Grove in FWWM, which was clearly shot at a different time.)

But most intriguingly of all, the fact that the Red Room is seen in the oil pool seems to directly presage Episode 29…but, at the time Episode 27 was shot, the plans for Episode 29 seemingly hardly involved the Red Room at all (in the script, only one brief scene is set in the Red Room, and the Black Lodge is depicted as a constantly-shifting series of backdrops as opposed to one fixed space; this was of course changed by Lynch when he came to shoot E29). It certainly appears in E27 that the curtains were projected onto the pool on-set (as opposed to being added as an optical effect later), based on the way the light plays off the pool and the surrounding circle of “snow.” So, the question is: how could Stephen Gyllenhaal have known that the Red Room would figure prominently in Episode 29 when Lynch himself likely hadn’t even decided that yet?

All of this leads me to think it’s likely that the scene was reshot during production of Episode 29, and makes me wonder whether they would have brought Gyllenhaal back or (more likely) if Lynch would just have shot it himself.

But the weirdness doesn’t quite end there, either. The most famous unscripted addition to Episode 27 (which Gyllenhaal has taken credit for) is the “trembling hands” motif. Interestingly, Gyllenhaal appears to take the ending scene of Bob’s disembodied arm (which WAS scripted) and extrapolate from that to create this added bit of mythology that Bob is seemingly momentarily controlling people’s hands like puppets.

I’ll get back to that in a second. But first, it’s important to point out that there was definitely one scene from Episode 27 that was reshot weeks after production on the episode had wrapped—and in fact may have been the last thing ever shot for the original TP show. The Bobby/Shelly scene (originally set in the Roadhouse, as seen in the Blu Ray deleted scenes) apparently was felt to strike the wrong tone, so it was rescripted and reshot as a Double R scene. The script for this reshoot is dated March 12, nearly a month after the latest prior rewrite of the E27 script, and likely after Lynch had finished shooting Episode 29 (which I believe was shot in very early March, based on the clapperboard seen in the Outtakes reel on the Blu Ray).

What’s fascinating about this is that the reshoot of the Bobby/Shelly scene is where we get the stocking-capped woman with the shaking hand! So, presumably, in Gyllenhaal’s original cut of the episode, it was only Cooper and Pete with shaking hands, and whoever did this reshoot added the beat with this extra (thus honoring the classic storytelling “rule of threes”).

Curious to hear others’ thoughts on all this.

Great post! I've honestly never considered that Lynch might have shot this sequence, but it makes a lot of sense, as the ending of 27 does feel so tonally and aesthetically in sync with 29.

I don't have any evidence to support this, but i've always suspected that Lynch did the ultra creepy Wyndham Earle scene at the beginning of 28.

Fascinating! I've had the same thought about Episode 27. The foreboding and surrealism is pure Lynch, and even more so, the ending with Bob is done in such an...uncanny, strange way. Bob appears to be talking...to who? We can't hear what he's saying. Why would he be? Why not just laughing or smiling...? It almost seems like an outtake. It's that very particular, unfathomable touch that makes me feel like it's a Lynch idea.

The ending is one of my favorite TV moments, just terrifying. The soundtrack and the camera moving through the Twin Peaks locations.

I also always connected the arm shaking to Laura's feeling that her arm went numb (I mean, close enough.) I basically see the arm thing as Bob attempting to control somebody.

(and of course, the arm stuff connects to The Arm (did Mike cut his arm off because Bob was trying to control him...?), plus wearing the ring, plus the arm wrestling in season 3, plus the little chihuaha in season 3 episode 1 named Armstrong......somebody stop me!)

Cappy said:
Great post! I've honestly never considered that Lynch might have shot this sequence, but it makes a lot of sense, as the ending of 27 does feel so tonally and aesthetically in sync with 29.

I don't have any evidence to support this, but i've always suspected that Lynch did the ultra creepy Wyndham Earle scene at the beginning of 28.
Click to expand...

I have wondered at the fact that the white makeup is reminiscent of The Alphabet and The Grandmother (and later, Lost Highway).

Mr. Reindeer said:
I have wondered at the fact that the white makeup is reminiscent of The Alphabet and The Grandmother (and later, Lost Highway).
Click to expand...

Very relevant are these briefly glimpsed faces of Leland and Laura in FWWM. 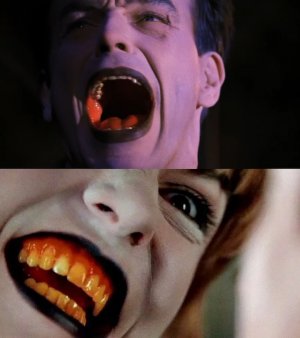 It's not the same style, but FWWM also features the white makeup on the jumping man, and the matching white mask of Pierre Tremond/Chalfont.

As I understand it, Robert Blake’s makeup in Lost Highway was his own invention, but he might have been inspired by earlier Lynch work.

Oh yes, of course. The thing is, when I first saw FWWM, I was just THRILLED that Lynch was tying together so many details from the show. I had heard that FWWM was its own thing, and even people mad that Lynch didn't follow continuity, but I had the total opposite reaction. When I saw Laura with that face I thought "!!! Like Windom Earle!!!"

Reflections: An Oral History of Twin Peaks
"I remember now, there was a whole thing in the script about a character feeling weird and I got more and more into ‘the arm’ part of it, and I really liked it. I thought, 'We could shoot a close-up of it, or what if it started to shake and you couldn’t control it?' So I called David and asked him what he would think if some of the characters’ hands shook just slightly. I think we even finished the episode with it. He said, 'Stephen, I’m glad you have your thinking cap on properly!'" — Stephen Gyllenhaal

Only today I learned that's the father of Jake and Maggie Gyllenhaal.

Back in 2015, Brad had another phone conversation with Gyllenhaal in which he was going to ask him some dugpa user questions, most especially about that ending scene and its origins (Joel/LostInTheMovies was the main user really fueling this line of curiosity at the time). Unfortunately, it turns out that Gyllenhaal didn’t rewatch the episode like he was supposed to before speaking to Brad, so he wasn’t able to remember enough detail to really clarify anything. Such a bummer.

This thread compelled me to revisit 27, titled "The Path To The Black House" on Paramount+ (lol).

Anywho, I was struck by how well done opening was, with the overly involved removal of Rusty Tomaski as a giant chess piece. Its probably the dumbest set piece in TP, but the way Glyenhall lingers on it so long fleshes its absurdity out in an almost comical way, before settling in on Willie Garson (and Andy) crying and reminding us of the tragedy of the moment.

So I do think he might possess the talent to have crafted 27's final scene, but the specific reference to the Red Room does strongly suggest Lynch's involvement.

Twin Peaks Actors Who Have Passed On